Many people struggle with nasal congestion.  The congestion can be causes by different issues.  Some of the more common causes of chronic nasal congestion include allergies, a deviated nasal septum, enlargement of the turbinates, and nasal valve narrowing.

When the turbinates become too large, they can make it difficult to breathe through the nose.  Often times, patients with enlarged turbinates notice that their nose becomes more congested when they are lying down.  They also find that the congestion often switches from side to side when they’re trying to sleep.  Turbinates can swell and shrink throughout the day and night, causing these congestion to switch back and forth.

When medications and allergy treatments do not help improve symptoms in patients with enlarged turbinates, we can sometimes consider surgery as an option to reduce the size of the turbinates.

Surgery is typically called turbinate reduction or turbinate resection.  Patients can choose to have the surgery in the office or in the operating room.  In many instances, enlarged turbinates are only one part of the problem.  Some patients also have problems like a deviated nasal septum.  In these cases, patients may have procedures like septoplasty at the same time they have their turbinates reduced.

There are many ways to shrink the size of the turbinates.

Examples of different types of procedures used for enlarged turbinates are cauterization, coblation, radiofrequency reduction, microdebrider resection, and partial resection.  All of these terms refer to treatments that can reduce the size of the turbinates.

Below is one example of how the shape of a turbinate changes as the procedure is performed. 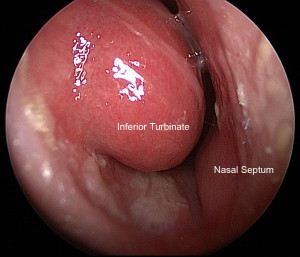 The inside of the right nostril showing an enlarged right inferior turbinate.

The same turbinate, shown just after reduction. There is more space for airflow.

During the recovery period after turbinate reduction, most patients have pain, fatigue, nasal stuffiness, and nasal drainage after surgery.  Pain is generally very mild with this type of surgery.  Most patients tell us that they have to take only a few doses of their pain medicine during the entire postoperative period.

Most patients find that they are very stuffy right after surgery from the swelling after the procedure.  This typically starts to improve about a week after surgery.  Patients typically have drainage of some mucus and blood from your nose after surgery.  This is a normal part of the healing process.

After surgery, we recommend that you use saline sprays and nasal rinses.  You can find sprays and rinse kits at most pharmacies.  Our patients find the NeilMed Sinus Rinse kit easy to use.  You can find out more information about the kit at www.neilmed.com.